Shrimp are crustaceans (just like lobsters and crabs) and they belong to a category of living things called arthropods. Like all arthropods, shrimp have their skeleton on the outside instead of the inside ) and this outer skeleton (technically called an exoskeleton) is one of the features that gives shrimp their unusual look—almost like having a head shield that blocks out all of their features except their eyes, mouth opening, and antennae. In the U.S., consumers don’t typically eat the outer skeleton, heads, or tails of shrimp, even though these parts are often rich in nutrients and commonly consumed in most other countries. Shrimp account for about 30% of all seafood consumed in the U.S. Out of 14-15 pounds of total seafood per year consumed by the average U.S. adult each year, about 4-5 pounds come from shrimp. (Salmon and tuna have typically engaged in a tug-of-war for second place, and are typically consumed in average amounts of approximately 2-3 pounds per year. Shrimp are produced, sold, and consumed in a variety of different forms, including fresh, frozen, breaded, cooked, dried, and in paste form. In addition, you will find shrimp that are peeled, unpeeled, veined, deveined, and with head on or head off.

It would be difficult to find a WHFood with greater diversity than shrimp. While we are accustomed to thinking about foods like potatoes as involving a wide variety of colors and shapes (for example, large brown russets, medium sized golds, or small fingerlength reds), there are hundreds of commercially important shrimp species and literally thousands of total species worldwide. Yet, there is no relationship between the species of a shrimp and its color. You can find pink, red, white, brown, blue, and green shrimp, but within each of these color categories can be found a wide variety of shrimp species. No less diverse are the habitats of shrimp. These remarkable crustaceans can live in freshwater, saltwater, brackish water, or a combination of habitats. (Brackish water—also sometimes called briny water—is simply water that falls in between freshwater and saltwater. It is more salty than freshwater and less salty than saltwater.) In terms of saltwater habitats, the Pacific, Atlantic, and Indian Oceans serve as the top three saltwater habitats for shrimp. Added to this unusual diversity of habitats is the tendency of some researchers to group shrimp together based on the average water temperature of their environment. Warm-water shrimp come from tropical waters in southern parts of the world, and cold-water shrimp come from colder northern waters. 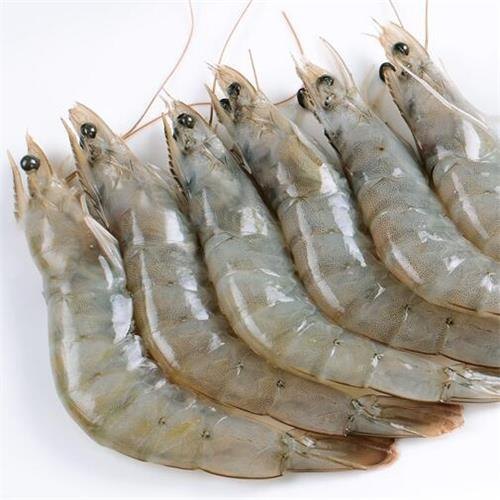 The terms “shrimp” and “prawns” can be confusing. Even scientists often use these words inconsistently. In the popular press and in many restaurants, larger shrimp—often from freshwater habitats—are referred to as “prawns,” while smaller shrimp—often from saltwater habitats—are called “shrimp.” In terms of size, “large” typically means that you get about 40 or less per cooked pound (in comparison to about 50 for “medium” and 60 for “small”). But from a science perspective, both shrimp and prawns can come from saltwater or freshwater, and there is no absolute standard for measuring small, medium, or large. In this article and throughout our website, we’ll be using the word “shrimp” as a general term that includes all species—even those which might be referred to as “prawns” in some research studies or in some restaurants.

Shrimp can be a unique source of the antioxidant and anti-inflammatory carotenoid nutrient astaxanthin. It is possible for a single 4-ounce serving of shrimp to contain 1-4 milligrams of astaxanthin. In animal studies, astaxanthin has been shown to provide antioxidant support to both the nervous system and musculoskeletal system. In addition, some animal studies have shown decreased risk of colon cancer to be associated with astaxanthin intake, as well as decreased risk of certain diabetes-related problems. Importantly, the astaxanthin content of shrimp can vary widely, mostly in proportion to the amount of astaxanthin in their diet. In addition, the source of astaxanthin in the diet of shrimp remains an ongoing controversy. Since over half of the shrimp consumed both in the U.S. and worldwide are farmed, the diets that they consume depend on the approach of the producers. Both synthetic forms of astaxanthin and naturally occurring forms found in phytoplankton and zooplankton have been used in shrimp farming. In general, when purchasing farmed shrimp, we believe that it makes sense to select shrimp that have consumed natural and plentiful amounts of astaxanthin from natural dietary sources including marine algae and zooplankton. You will find more recommendations regarding shrimp selection in our How to Select and Store and Individual Concerns sections below. 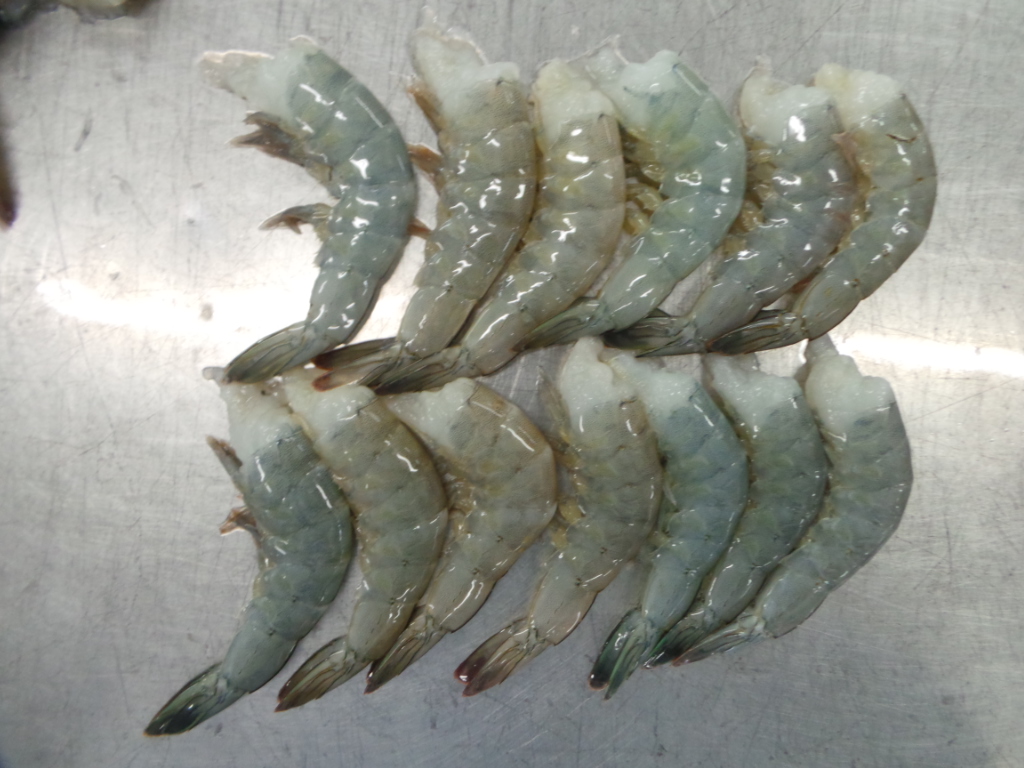 At 56 micrograms in every 4 ounces, shrimp is an excellent source of the antioxidant mineral selenium. Recent research studies show that the selenium contained in shrimp can be well absorbed into the human body. In one study, we’ve seen an estimate of about 80-85% for total selenium absorption from this shellfish. Since selenium deficiency has been shown to be a risk factor for heart failure and other forms of cardiovascular disease, as well as for other problems including type 2 diabetes, compromised cognitive function, and depression, shrimp may have a unique role to play in your meal plan if your health history places you at special risk in any of these areas.

A second mineral benefit often overlooked in shrimp is its unusual concentration of copper. Not only does shrimp rank as a very good source of copper at WHFoods, but it is also our only fish to achieve this very good rating. Several recent studies show the copper richness of shrimp to be a standout among other fish. Researchers have pointed to a copper-containing protein in shrimp called hemocyanin as a likely reason for shrimp’s unique copper richness. (This copper-containing protein is involved is the shrimp’s oxygen metabolism.)

Shrimp is often included on the “avoid” list for persons wanting to minimize their dietary intake of cholesterol. The 220 milligrams of cholesterol contained in a 4-ounce serving of shrimp makes this approach a legitimate concern. However, despite its high cholesterol content, several recent research studies have noted some desirable aspects of the fat profile in shrimp. One of these desirable aspects is shrimp’s omega-3 fat content. Four ounces of shrimp provides about 325 -375 milligrams of omega-3 fatty acids, including about 50% EPA (eicosapentaenoic acid) and 50% DHA (docosahexaenoic acid). EPA and DHA are especially important omega-3s for cardiovascular and nervous system health. In addition to this great mixture of omega-3s, shrimp also provides an unusual omega-3:omega-6 ratio of approximately 1:1. Since higher ratios of omega-3:omega-6 are associated with decreased risk of many chronic diseases—including obesity, high blood pressure, and type 2 diabetes—this aspect of shrimp’s fat content should be a huge plus, especially in meal plans with excessive amounts of omega-6s. Finally, it is interesting to note that according to recent studies, cholesterol is not the only sterol in shrimp. This type of fat is found in smaller amounts in the form of clionasterol and campesterol. While chemically similar to cholesterol, these other sterols function as anti-inflammatory molecules and they are associated with decreased levels of LDL-cholesterol, which would be considered a health benefit by many researchers. When looked at from this broader perspective, risks related to the high cholesterol content of shrimp might be overshadowed by its omega-3 and sterol composition—but we will need future studies to help us understand more about the big picture involving shrimp and fat. As always, if you have concerns that have you need to be cautious about cholesterol intake, discuss the inclusion of shrimp in your diet with your healthcare practitioner.

We don’t usually think about seafood as a source of antioxidants, but shrimp features at least three unique antioxidants in its nutrient composition: the xanthophyll carotenoid called astaxanthin, and the minerals selenium and copper.

At only 7 calories per shrimp, we can eat a relatively large amount of this shellfish without using up too many of our daily calories. For example, a person eating 1,800 calories per day could consume 20 shrimp and only be “spending” about 8% of his or her daily calories. This very low calorie cost would not be so remarkable if it were not for the fact that shrimp provides us with significant amounts of so many nutrients. We usually have to eat foods with a far greater calorie content to get the nutrient richness provided by shrimp. For example, those same 20 shrimp that provide us with about 140 calories also provide us with 25 grams of protein or 50% of the Daily Value (DV).They also provide nearly 2 micrograms of vitamin B12—over 80% of the Dietary Reference Intake (DRI) level for adults. When this nutrient richness list for shrimp is continued across the list of other vitamins and minerals provided by this fish, it becomes striking how much nourishment can be provided by shrimp for less than 10% of a total day’s calories.